Gas is a fossil fuel, like coal. It can be even worse for the climate than coal because it leaks into the atmosphere during extraction, processing and transport.

After decades of rising carbon emissions, there is no room for exploitation and development of new fossil fuel sources. The International Energy Agency in May 2021 that to meet the Paris Agreement goals, there should be no new investments in gas, oil, or coal production.

Building new gas infrastructure will lock us into a polluting fuel for decades. Rather than be a bridge to a more sustainable future, it is a wall impeding progress.

Gas is not a 'greener' alternative to coal
Recent findings show that the extent of leakage from gas infrastructure exceeds what is reported by gas companies. Once you factor these leaks into the environmental footprint of gas it undermines or completely eliminates claims that it is less polluting than coal.

Renewable energy is the smarter and cheaper choice

The costs of renewable energy have fallen dramatically, and renewables are now cheaper than fossil fuels in most of the world.

Emissions from Viva's terminal would be huge
The report, titled Viva Energy Australia Gas Import Terminal Emissions Analysis, says Viva’s existing operations currently make up 35 percent of all the emissions from the City of Greater Geelong, which has a community-wide target of net-zero emissions by 2035.

The gas terminal project would increase Viva’s contribution to 52 percent of all emissions in the greater Geelong area by 2040.

How are we going to achieve our net-zero targets with new sources of emissions coming online? 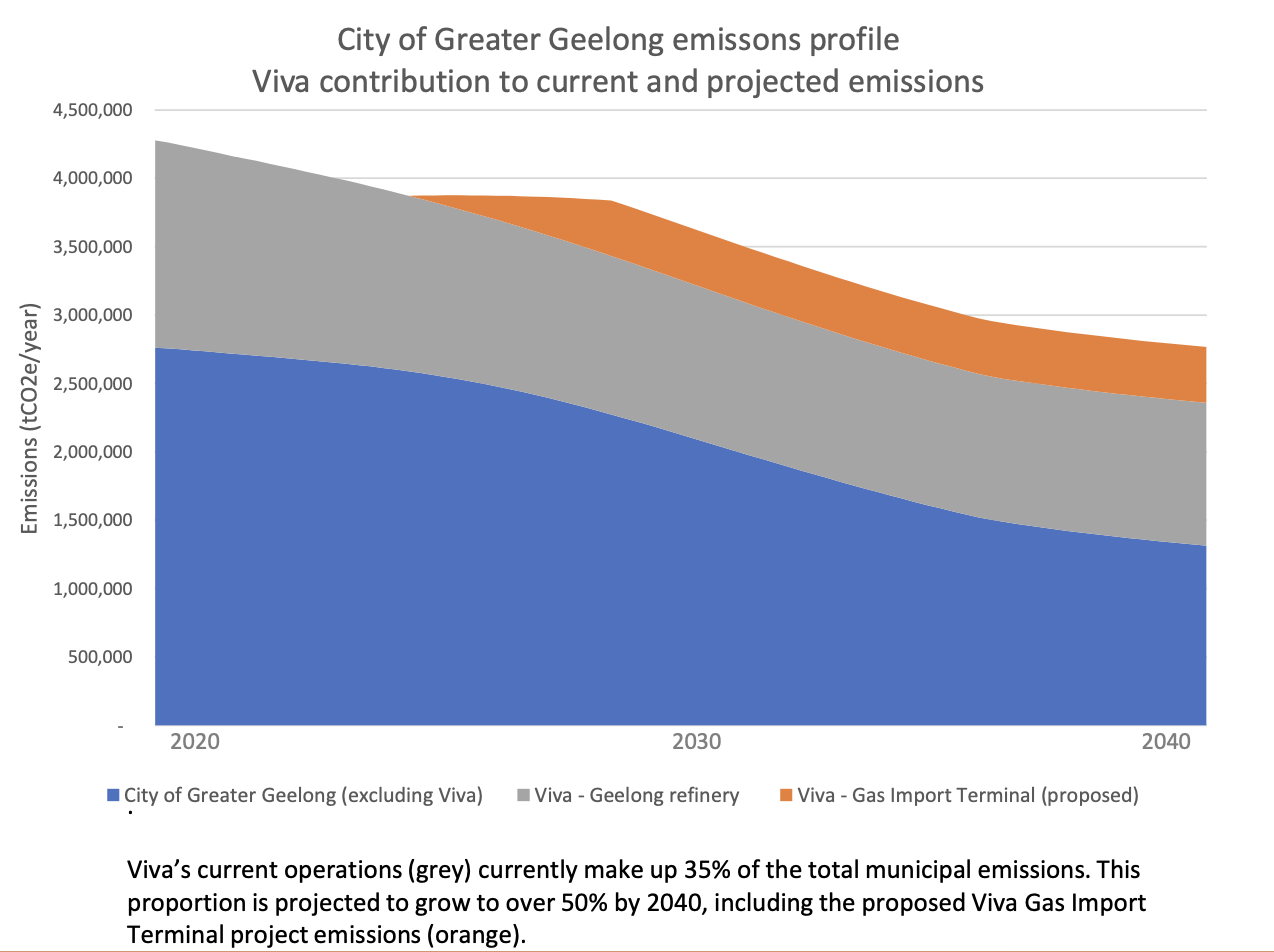 A 2015 study from the University of Melbourne found switching from using gas heating to a reverse cycle air conditioner saved up to $658/year for a large home in Melbourne.

A July 2018 report from Renew and funded by Energy Consumers Australia found owners will be between $9,000 – $16,000 better off over 10 years if they establish their new home as all-electric with a 5-kilowatt solar system rather than gas-electric with no solar.

A November 2020 report from the Grattan Institute also found that households in Sydney, Melbourne, Brisbane, Adelaide, and Canberra that move into a new all-electric house with efficient appliances will save money compared to an equivalent dual-fuel house.

Why we don't need gas

Can the government help households get off gas? Gas is frequently more expensive and polluting than using electricity, especially if that electricity comes from renewables sources like the sun and wind.

Approving this gas project has the potential to lock in a polluting and expensive fuel for decades. And it is expected to make the impacts of climate change — like heatwaves, bushfires and drought — worse for us and our kids.

The Victorian government is helping households switch to clean energy and efficient electric heaters so that people in Geelong can save on their energy bills and cut pollution.

We encourage Geelong residents to get off gas and start saving money during winter. $1000 rebates are available from July 2021 for households with a concession card or combined household income of under $90,000

Why would we need to import gas? Australia already produces more than enough gas for its own use. But since 2015 the big energy companies have been exporting it overseas through a huge terminal at Gladstone in Queensland.

Australians also pay more for Australian gas than those countries we export to and this fact alone should be unacceptable.

Australia is actually one of the biggest gas exporters in the world. It’s outrageous we’re considering importing gas because the big energy companies have manipulated the energy market.

We should stop sending so much gas overseas and reserve enough for Australian use. We can also reduce gas demand by helping households switch to energy efficient electric heaters and cookers as fast as possible.

So why do the energy companies say we need this terminal? Energy companies want to import gas because they claim there will be a ‘shortfall’ of gas in Victoria, but this is based on old information.

Previous forecasts estimated a shortfall in winter 2023, due to declining gas production in Bass Strait. However, the most recent official forecast, the Australian Energy Market Operator (AEMO)’s  2021 Gas Statement of Opportunities, found that we should have enough gas supply until at least 2026 provided committed field developments and expansions proceed as planned.

The reason is a new gas import terminal has already been approved for Port Kembla in NSW and gas distributor Jemena will modify a pipeline to allow this gas into the east-coast transmission system.

But by 2026, gas demand can be much lower. The 2021 Victorian Gas Planning Report forecasts Victoria’s annual total gas consumption is expected to decrease by more than 12 percent by 2025.

Analysis from Environment Victoria shows this program will reduce gas consumption in Victoria by enough to avoid a shortfall in gas use over winter during colder years.