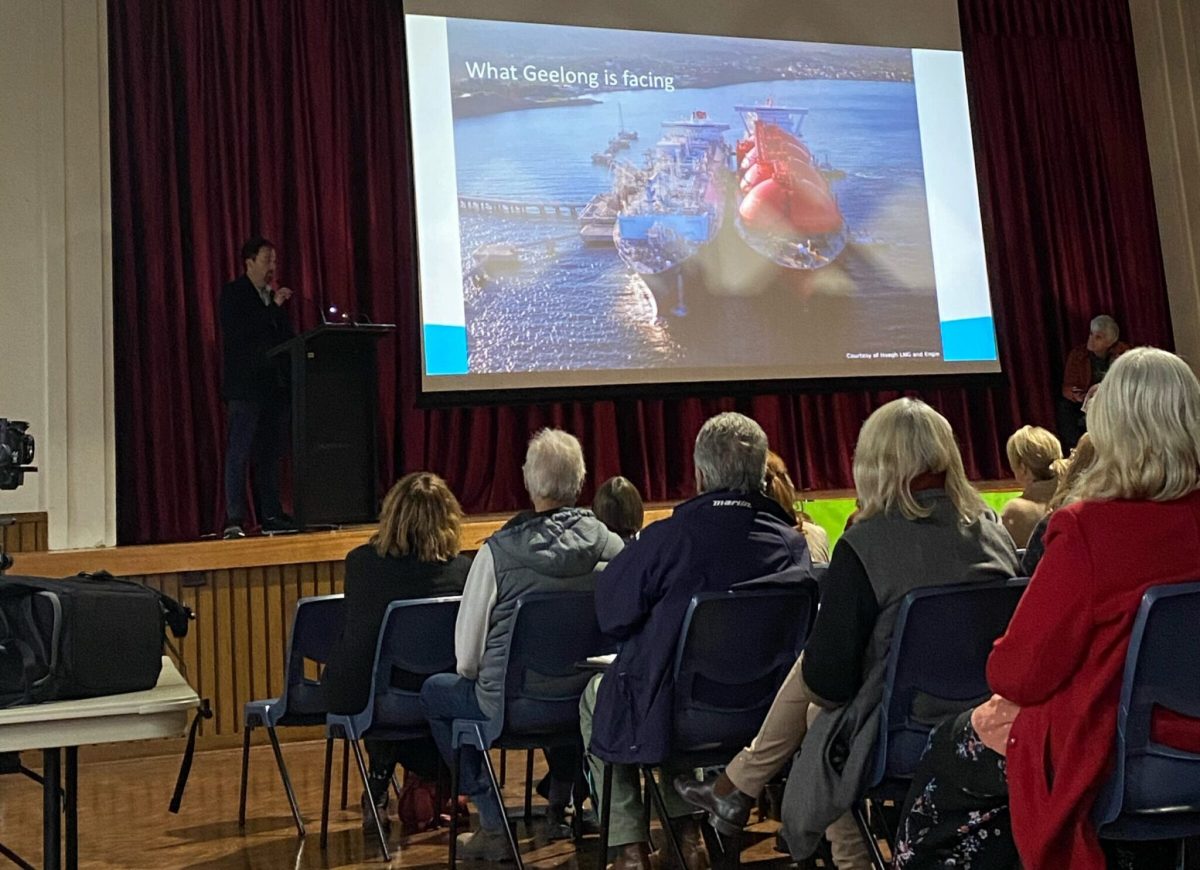 Firmly convinced that the accelerating uptake of renewable energy will negate any likelihood of a shortage of gas supplies, attendees at Geelong Sustainability’s recent sold-out Energy Futures Forum were unanimous in calling for an urgent transition to renewable energy sources.

The Geelong Energy Futures Forum was held in response to proposals from Viva Energy and Dutch company Vopak to build terminals in Corio Bay and nearby Avalon Beach.

Both companies are basing their plans on a supposed shortfall in gas supplies for Victoria.

But Forum panellists blasted those plans with a comprehensive array of evidence that there would be no such shortfall and that Geelong will reap significant benefits by rapidly embracing renewables.

One prominent panellist called on Geelong residents to “get political” in order to get the benefits of moving to renewables and to start mitigating the effects of climate change.

Forum attendees were 100 percent behind wanting all levels of government to prioritise the transition to renewable energy sources.

Watch the summary video below;

The Victorian Government has already taken a major step in this direction with its program to replace old gas heaters with more efficient reverse cycle electric heaters.

Victorian Minister for Energy, Environment and Climate Change and Minister for Solar Homes Lily D’Ambrosio, who opened the sold-out forum, said “renewable energy is the bedrock of our move to decarbonise Victoria.”

Evidence of this is the growth in renewable energy output and jobs in the renewable energy sector she said. Last year 30 percent of all such jobs nationally were in Victoria. The Big Battery to be commissioned by year-end in the Moorabool Valley near Geelong will be the largest renewables battery in the Southern Hemisphere.

Painting a picture of the urgency with which we should move to renewables, independent energy consultant Ian Dunlop said that a 1.5 degree C global temperature rise will occur before 2030 and a Federal Government target of net zero emissions by 2050 is totally inadequate.

“We have the technology and solutions (to move to renewable energy) which now offer enormous social and economic benefits,” he said.

A two-step plan, which calls for the electrification of everything followed by the decarbonisation of the generation of electricity, was recommended by Simon Holmes a Court, Senior Advisor at Energy Transition Hub, Melbourne University. This plan would account for 80 percent of the country’s present emissions which, since 1990 have increased by 40 percent said Mr Holmes a Court.

Meanwhile between 16000 and 20000 jobs would be created in Geelong in the process of moving to renewable energy, according to Beyond Zero Emissions, an organisation which draws on data from 130 member organisations across Australia. Spokesperson Ms Imogen Jubb said 1.8 million jobs would be needed in the foreseeable future as the country proceeds down the renewables path.

She said additionally households can save between 50 and 80 percent of their energy costs by retrofitting homes to improve energy efficiency.

This represents annual saving of between $1500 and $2480 per household while also creating local jobs to undertake this work she said.

Dan Cowdell of Mondo Energy said that on the ground 19 percent of Geelong dwellings have solar and of these about 25 percent also have batteries.

“These domestic initiatives are complemented in the corporate world by Deakin University with its 7 megawatt solar farm and Barwon Water’s target of 100 percent renewables,” he added.

Colin Long of the Victorian Trades Hall Council told the Forum that “employers should not to pretend to workers that there was a future in fossil fuels.

“They should engage with workers in the transition process to renewables,” he said.

There was consensus among the Forum speakers that there were many renewable energy initiatives underway but that they needed to be part of a larger plan.

Speaking for the panellists Simon Holmes a Court said “it’s time for the community to get political about the move to renewable energy.”

A link to a video of the Geelong Energy Futures Forum can be found at: https://www.facebook.com/geelongsustainability/videos/?ref=page_internal