LNG is hazardous by nature and despite best engineering and procedures, accidents do happen. When they do occur the consequences can be catastrophic.

At least 30,000 Geelong residents live within 3.5km of the import terminal and tanker routes

A study commissioned by the US Department of Energy identified 3 hazard zones around LNG tankers:

Zone 1: within 500m. Significant chance of fatality for people with instantaneous exposure (due to fire, asphyxiation or freezing).

Zone 2: within 1.6km. Possibility that extended exposure would result in fatality

Zone 3: within 3.5km. Possibility of burns in the event that a vapour cloud extends into this zone and ignites.

Incidents or terrorist attacks may occur anywhere along the route shown below. Residential houses in the suburb of North Shore are as close at 250m to the Corio Shipping Channel. 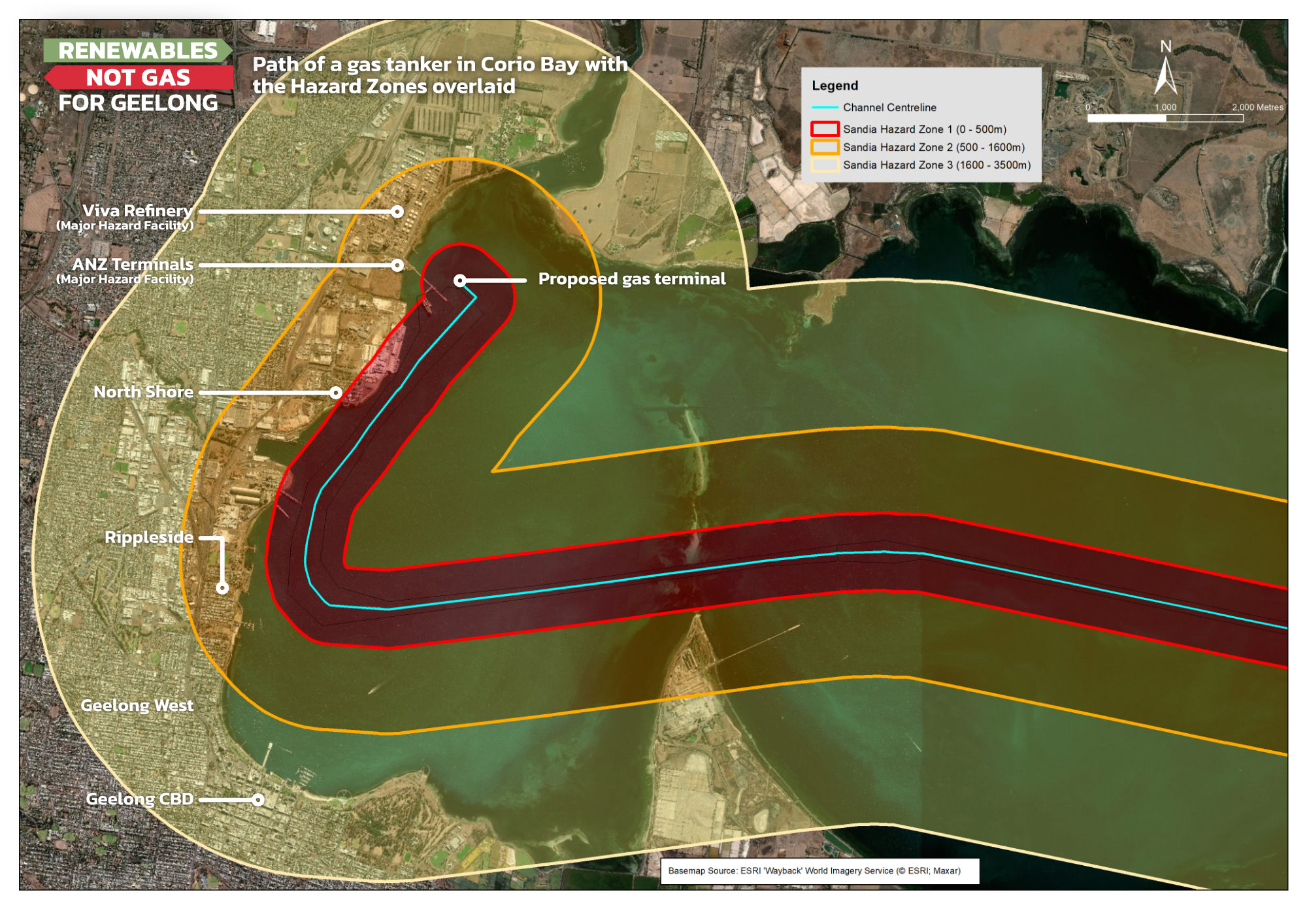 Disruption to the Bay
In order to mitigate some of these risk, LNG terminals in other places in the world have stringent and restrictive buffer zones.
The arrival of every LNG tanker into the port of Boston is requires the closure of bridges the tanker passes under, along with an armed escort, overhead helicopters, police divers, marine patrol and more. At the Port of Darwin, no other vessel is allowed within 500m of the path of the tanker for 30mins prior and 30mins after the tanker has transited the area.
These restrictions if applied to Corio Bay, would have a large impact on recreational users of the Bay

Why is Geelong Renewables Not Gas concerned about safety at the proposed Viva LNG import terminal in Corio Bay?

The proposed Viva facility will be too close to public infrastructure, residential areas and the two existing Major Hazard Facilities (MHF). Shell Parade, a major arterial road which carries hundreds of heavy vehicles each day and which from mid-2022 will become the designated Northern vehicle route to and from the Spirit of Tasmania terminal, is within metres of the proposed above-ground high-pressure gas pipeline. Any run-away vehicle has the potential to impact this pipeline and cause not only a local large gas release and fire but an escalating incident at either of the adjacent MHFs. Geelong’s renowned Bay Trail Cycling Path, which attracts visitors from across Geelong and beyond, is wedged between the busy Shell Parade and the above ground pipeline.

Why do LNG Tankers pose a safety threat in Corio Bay?

LNG (Liquid Natural Gas) is 95 percent flammable methane gas. When a large quantity of LNG spills from a tanker, it forms a pool of liquid on the water and can spread out hundreds of metres from the initial spill site. As the liquid pool warms, the LNG changes into gas, forms a visible negatively-buoyant, fog-like flammable vapor cloud and can drift downwind thousands of metres. As the cloud drifts, it displaces the oxygen in the air and can potentially asphyxiate people.

If the flammable vapour cloud finds a spark, flame or other source of ignition, the resulting fire will burn back through the vapor cloud toward the LNG pool. It will continue to burn above the LNG pool on top of the water surface and creates what is known as a ‘pool fire’. Such fires are very intense, burning far hotter and rapidly than oil or gasoline fires. LNG pool fires cannot be extinguished and all the LNG must be burned before the fire goes out. Thermal radiation from LNG pool fires is hazardous for large distances. Large scale testing completed at purpose-built test facilities simulating LNG pool fires from tanker spills, concludes that safe thermal radiation distances may be as far as 3.5 km from the pool fire. More than 30,000 Geelong residents live within 3.5 km of the Corio Bay shipping channels where it is proposed that LNG tankers will transit. Incidents or terrorist attacks may occur anywhere along this route. Residential houses in the suburb of North Shore are as close at 250m to the Corio Shipping Channel.

Even communities at the entry to Port Phillip Bay will be inside the hazard zones. 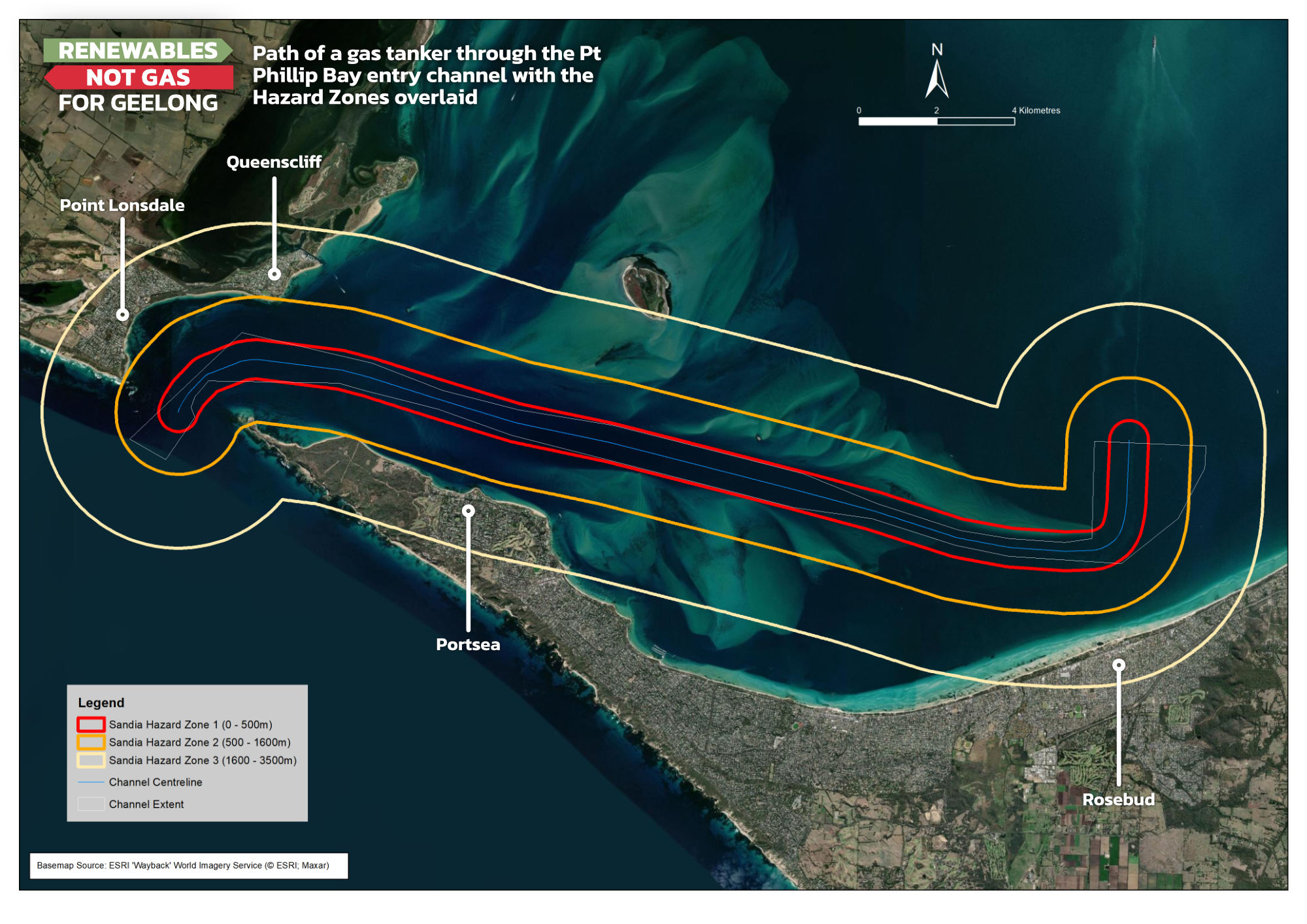 Why act now about safety?

The Geelong community risks living in constant danger of the consequences of an LNG incident or terrorist attack or otherwise having to deal with onerous access restrictions to large parts of Corio Bay if safety and security exclusion zones are deemed necessary later on/after the proposed LNG facility is approved and built. There is an abundance of good science from LNG facility incidents around the world which concludes that LNG facilities must only be kept at remote locations.

The people of Boston, USA, are burdened with the unenviable legacy of an LNG Terminal, built in 1971. The Everett Marine terminal is situated in the middle of Boston Harbour. Its proximity to urban areas, the Boston CBD and the attractiveness of LNG tankers to terrorist attacks means that many retrospective restrictions and controls have been put in place for every LNG tanker movement into the terminal.

Restrictions include the full closure of the six lane Tobin Bridge. NBC News describes the process of LNG tanker movements through the Boston Harbour as “..the Coast Guard coordinates an armada of protection for each trip – a helicopter, police divers, marine patrol, environmental police, firefighting tugs, city police boats, Coast Guard Vessels. The Tobin Bridge, a major commuter pass is closed as the tanker move below its 135-foot high span..” Surely, an armada like this is something that Geelong could do without.

What safety regulations cover the siting of gas plants in Australia?

Clear nationwide safety regulations which cover the siting of LNG facilities in Australia do not exist. As such there is an immediate need for all LNG marine facilities or FSRU’s to be governed at a Commonwealth level by a national body such as NOPSEMA (National Offshore Petroleum Safety and Environment Management Authority).

Are there any international regulations which could provide examples for Victoria to follow?

Yes. After 9/11, the US Federal Government, concerned about the attractiveness of gas tankers to terrorist acts, funded scientific field testing and modelling to quantify the consequences and risks to the community of a potential terrorist attack on a gas tanker. The recommendations from this scientific testing were initially challenged by industry. However, they have subsequently been accepted and validated as proven and now are fully incorporated in Federal Regulatory processes for all gas facilities in USA waters. The key overlying principle accepted following this testing is that LNG facilities are to be ‘remotely ‘located from residential/urban areas due to the potential for catastrophic and far-reaching consequences of an accident or attack.

What tests have been conducted in the USA to determine the impact of an incident in which there was a rupture to a gas tanker?

Testing in New Mexico in (Phase 1 in 2004, and Phase 2 in period 2008-2011) defined three hazard zones around LNG tankers: 500 m, 500 m to 1.6 kms and 1.6 kms to 3.5 kms. The Phase 2 testing focussed on simulating incidents on modern LNG tankers with double hulls and modern safety equipment. The hazard zones minimum distances are based on the scenario of an intentional attack on an LNG tanker resulting in a five square metre rupture in the tanker hull and loss of containment from one of the LNG containing compartments. This conservative estimate of hole size is consistent with the damage experienced by the double-hulled oil tanker, The Limburg, in 2002, when it was hit by a small explosive laden dingy, releasing over 14 million of litres of crude oil to the ocean which caught fire. Fortunately, this attack occurred in a remote location about 5 kms from the terminal, and while it did not impact on the public, a crew-member was killed and a number injured.

What precedents are there for gas-related accidents, in Australia and elsewhere?

LNG is hazardous by nature and despite best engineering and procedures, accidents do happen. When they do occur the consequences are catastrophic. This was exemplified in the 2004 Skikda LNG facility explosion in Algeria which killed 27 people, the 1973 Staten Island LNG explosion in the USA which killed 40 people and the 1944 Cleveland LNG facility, also in the USA, which killed 130 people.  In the past two decades there have been examples of major gas accidents across the globe, from Malaysia, Belgium, Canada, Nigeria and Japan to Singapore.

What safety mitigations have been implemented at gas facilities elsewhere in Australia?

Interstate authorities have acted on the safety risks associated with the siting of gas facilities. At Darwin LNG, for example, there is a 500-metre moving exclusion zone around any vessel carrying gas into the port and a land exclusion zone of 500 metres around the gas facility. At Gladstone in Queensland, the regulations mandate that four tugs are used for gas tankers in the port whereas other non-gas tankers only require two tugs. A firefighting tug must also be always on hand when there is a gas tanker in the port. There are also restrictions on the type of gas tankers allowed into certain areas of the Gladstone Port. Fixed maritime exclusion zones apply around all berthed gas tankers. 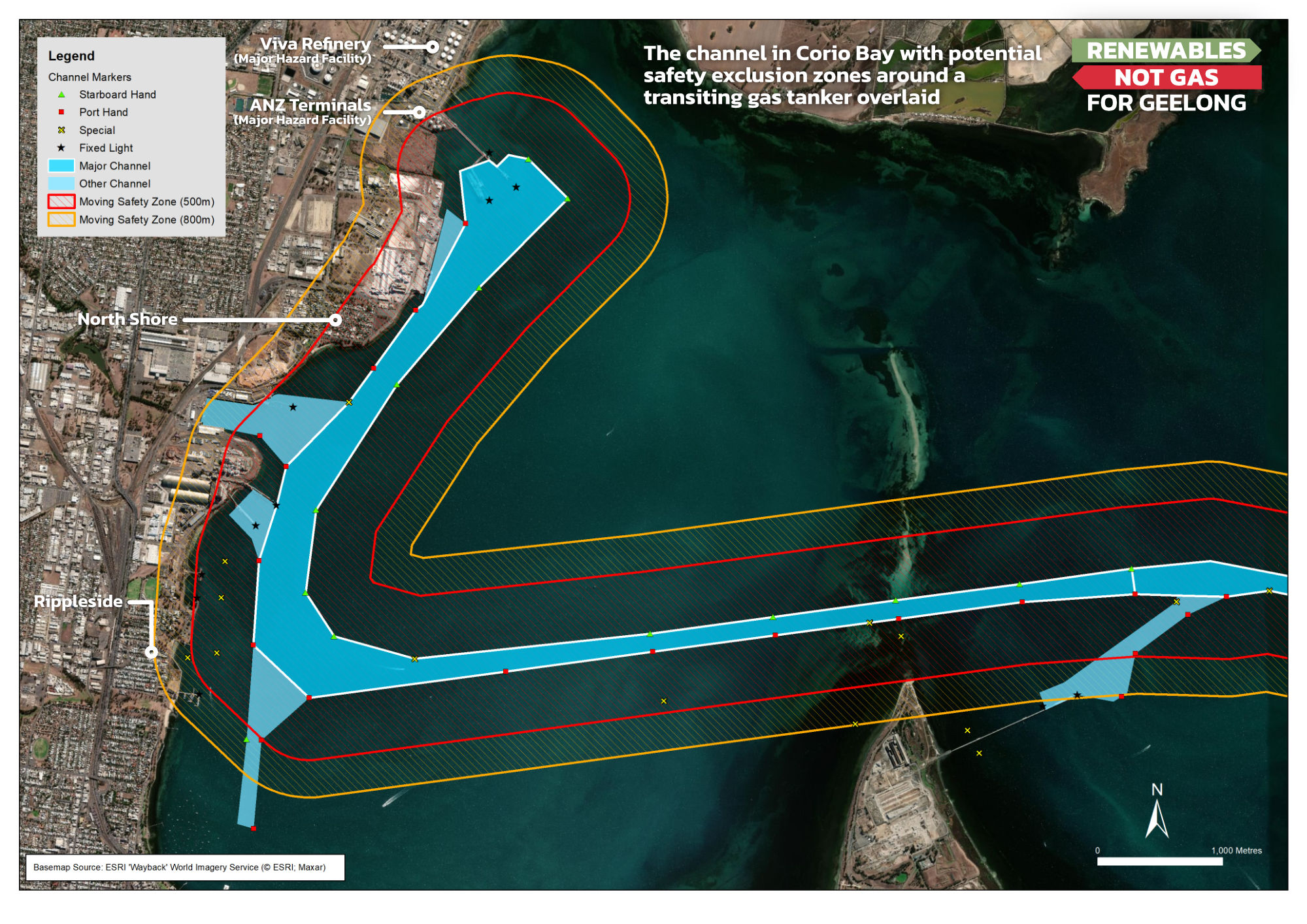 After 9/11 the Australian Government recognised the need for a maritime security information card (MSIC). To obtain an MSIC, all applicants are screened for any criminal activity associated with terrorism or piracy. The objective of the screening is to mitigate the risk of terrorism or piracy on the waterfront or in a port area like Geelong. The MSIC applies to Australia maritime workers and reduces risk from a locally orchestrated incident. However, it is has limited influence on potential security risks posed by foreign crews on foreign flagged vessels. The MSIC does not specifically address safety-related issues to LNG tankers or consequences of incidents involving LNG tankers.

Do Victorian regulatory agencies have any experience in LNG?

There are currently no LNG marine facilities in Victorian waters. Viva has not yet confirmed how many members of the Viva Gas Hub ‘Technical Reference Committee’ are experienced in safety in LNG transport and LNG facilities.

Watch our community meeting "Residents at Risk" where we focused on the risks to the community from the gas import terminal proposal.

Download a powerpoint presentation given at the Residents At Risk event, from Garth Norman a concerned North Shore resident and engineer in the oil and gas industry for more than 20 years.